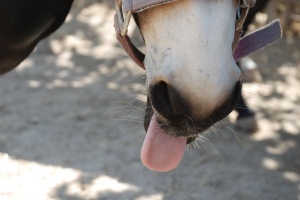 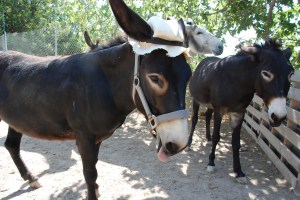 It’s a serious question. Morris spends quite a lot of his time standing around with his tongue hanging out. This is not new behaviour but something I have been observing for some time. It is not particularly associated with the expectation of food, although he does tend to have his tongue out more while I am preparing their food.

On the occasion shown above, which was earlier today, I had just given the donkeys a treat: they were under the fig tree and all the ripe figs at their level have been removed, so I found four from the other side of the tree which they can’t access, and I gave them a fig each. (Figs have to be limited because the sugar content is too high.)

That seems to have prompted Morris to poke his tongue out, but he can be seen with his tongue out at all times of the day, whether lolling about sunbathing or standing around admiring his mother and the other two female companions.  It would be nice to know if anyone else has a donkey that does this.

7 thoughts on “Why does Morris stick his tongue out?”