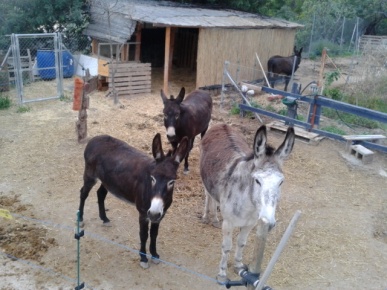 We don’t care if the clocks have gone back! Where’s our breakfast?

I was woken at eight o’clock this morning by the sound of mournful protest from the field: the donkeys were braying continuously.  Then I realized the problem. The clocks went back but not their donkey clocks…  I hastened down to the field to give them breakfast, and explained it was all the prime minister’s fault.  This was a convenient lie but the donkeys believed me. The Spanish prime minister was in our village of Finestrat yesterday.  I took this photo of him flanked by the old mayor Honorato on his right and the new mayor Juan Francisco on his left, as they arrived for the start of a Popular Party election meeting, with the magnificent Puig Campana in the background.

The general election is in December and it was quite a surprise that the Spanish prime minister should choose to launch his Popular Party’s election campaign in our village.  I guess it was all about the symbolism of having a mountain to climb, a theme which was signalled in his speech. The mayor challenged him to climb up Puig Campana after he wins the election on 20th December. Rajoy made a number of promises including “solving the water shortage in the province of Alicante”, which raised our hopes that the boring speech would finish with an interesting prime ministerial rain dance. We were of course disappointed.

After the event, as we enjoyed an Estrella Galicia beer in the Bar Cantonet, my friends told me I was marked quite closely by a security man standing behind me during the entirety of the prime minister’s speech. I couldn’t quite understand why I should appear particularly suspicious (apart from wearing a a British Legion poppy on my lapel). However, I did wonder later if the security people had been tipped off by one of the army of Guardia Civil patrolling the village, who may have seen me park my scruffy little Ford Fiesta sporting its new donkey symbol:

My reason for putting a donkey sticker on my car should be obvious to readers of this blog. However, the donkey stickers are usually displayed in Spain as an indication of pride in Catalonia: so I might reasonably be mistaken by nervous security men for a Catalan subversive.

To avoid this mistake in future, I think I should buy four more donkey stickers to put on my Fiesta, so it is clear that it simply means I have four donkeys.  I won’t be able to find a sticker than looks like Matilde, so I will need to make my own.