Last October, the Spanish Prime Minister Mariano Rajoy launched the Popular Party election campaign in our village of Finestrat and I reported on it on this blog.  Many of us who supported the PP in the village – including a number of ex-pats of various nationalities – gathered to support the PP in the open-air concert space overlooking the village.  The new Mayor Juan Fran was there, and the old Mayor Honorato, having walked into the jamboree either side of Mariano Rajoy, like proud sardines escorting the tuna, as seen in the photo I took from my smartphone. 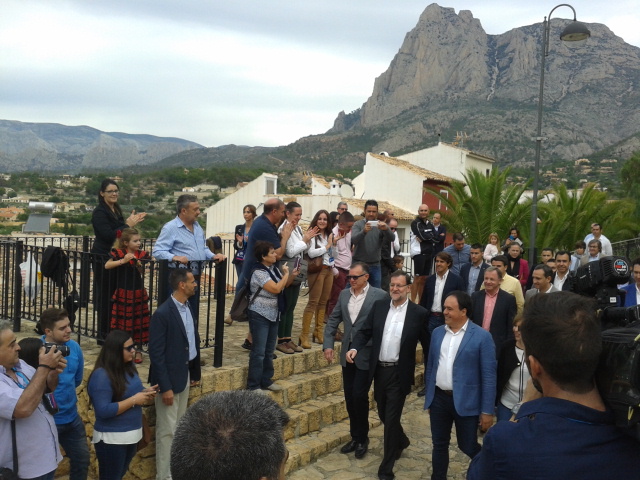 The current Mayor Juan Fran began with a welcome and then the warm-up speakers went through their paces. A fiery speaking woman appeared at the microphone and all we were told by way of introduction was: “Here is a woman who needs no introduction.”

All around me, in the unprivileged outer circle of the audience, people were saying, “Who is she?”  It was in fact Isabel Bonig, the president of the PP in Valencia.  She spoke for about ten minutes or quarter of an hour, in a highly impassioned manner, in support of Mariano Rajoy and we all enjoyed it immensely. But we had no idea who she was.

This is a clue: a small insight into the present revelations of massive corruption.   The Popular Party in Valencia have been so full of themselves for so long, these arrogant and corrupt elitists simply forgot that there were any other people outside of their narrow little club.  And some of us fell for their charm.  Yes, count me in.  As recently as last year, I said to the old mayor, Honorato, “I will probably join the PP soon and help with the English translations of your propaganda materials, which are not very good!”  My grandfather – long dead – had fought with the International Brigades in 1937-38 and I sometimes wondered what he would say to me, siding with the PP.  But a wise friend advised me to keep clear of joining the PP: there were good reasons to keep well clear.  So I never did what my simple conservative political instinct dictated.  Now I am glad I never got involved with the PP. 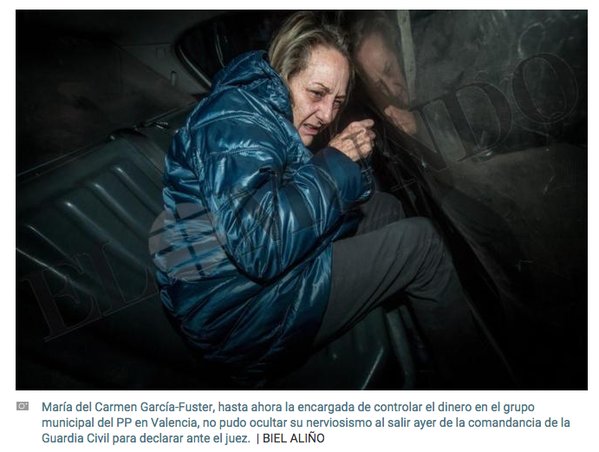 This is a photograph showing the searing banality of political corruption and the ever-spreading stain on Spanish politics. The El Mundo front page photograph from last Wednesday shows the Secretary of the Popular Party being driven away from detention by the Guardia Civil, to appear before the judge in Valencia on corruption charges, along with 23 other PP officials arrested on charges of corruption and money laundering. Organised crime is now the main activity of the Popular Party in this region!

As the late Roland Barthes would have pointed out, the semiology is complete with García-Fuster’s ski jacket ironically matching the exact colour tone of the Partido Popular’s slickly produced election branding.  “España en serio.” 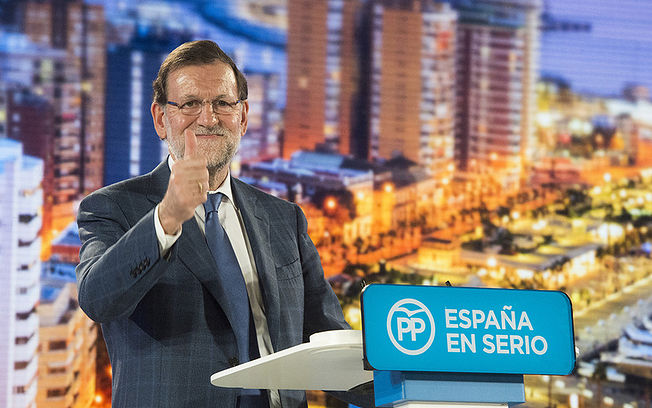 Since the meeting here in Finestrat launching Rajoy’s election campaign, I am not the only one who has now – sadly – distanced myself from the Popular Party.  There are many more who were natural supporters of the PP who now (face palm) cannot see how these people could have conned us all so horribly.  Organised crime is pretty horrid. Money laundering by a little elite group of mafiosi is not what we would have hoped for, as mere conservative supporters of a political party that proclaimed good old middle class business and free market values!

The really sad thing is this.  Talking to people who are totally disillusioned with the Popular Party now, here in Finestrat, none of us would have wanted to vote for anything other than conservative politics.  But we will not any longer give any support to a Popular Party mafia that can arrogantly disregard its voters and do what it pleases.  We won’t be voting for the PSOE or the loony left Podemos!  We will just drift and be part of that vacuum in which the ultra left can thrive.   Isabel Bonig in a two page interview in the Información de Alicante today (31 January) said that all the “corupción” that fills twenty pages every day of the local press is “historical”; therefore sad but not really of concern today…

2 thoughts on “A woman who needs no introduction”

Commenting is currently turned ON