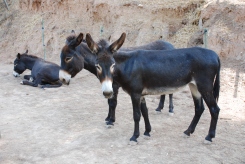 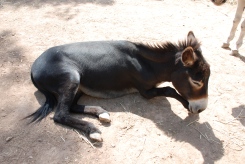 Aitana flopped in sunshine after a good feed.  The angular shape of her top half still shows the evidence of the weight loss, but her tummy is filling out again.  She is looking much happier and doing her customary regular patrols around the terraces to see what is new; this in contrast to spending her time standing in the stable motionless, as has been the case for much of these past weeks.

Signs of weight-loss remain. In the photo where she is sitting up, there are tell-tale folds of skin around the top of her leg, and standing next to Morris, I can see how her cheeks still remain sunken compared with his.  The weight-loss has to be seen against a history of these animals being slightly overweight, so she is probably getting back to nearer “normal” weight for a donkey of her height now.

The food delivery from Nutrivila comes tomorrow: 24 bales of straw and just two of alfalfa.  The mix of alfalfa in straw was already low but is being reduced, not cut out completely as any changes in diet need to be introduced gradually.  Cereal grain is not being given daily any more (not even the handful they had previously). I have had so much conflicting advice about this but will defer to the clear instruction in the Donkey Sanctuary diet sheets as the definitive guidance on this: “Avoid all cereal based feeds.”

For Aitana there will also be a vitamin supplement and Biotin to encourage hoof growth.  It is good to see her stretching out her front legs when lying down, as she had largely been keeping them folded in when lying down before, presumably to ease the pain in her tendons. Now I know what the signs of laminitis are, after this episode, I will know what to look out for and catch it early if it ever happens again.

I keep coming back to the thought of what happened on the 4th July when she was given that ‘flu innoculation by the vet, who failed to observe Aitana was suffering from laminitis.  If you are going to give an equine a quick visual check to see if they are fit to inject with a virus, would you not be looking for signs of laminitis as a clear indication of health?

Aitana is lucky to have survived.  I won’t be letting a vet anywhere near my animals in future unless I have full confidence they know what they are doing.

Thanks to those of you who have taken an interest in Aitana’s recovery, and also for the advice that some have given.  Now perhaps, I can try to recover from all the worry and enjoy the last week of my long-awaited summer holiday…