I was going to write the Tuesday blog this week, but Rubí got in there first.  So you get two Tuesday blogs this week.  The nasty people who get their thrills by stressing a worried donkey, in the benighted village that the Refugio del Burrito brought to our attention, claim to be doing this because of “TRADICIÓN.”

Leaving aside the ignorance of those who torture animals by excusing it as a tradition, it is becoming abundantly clear that the rapid secularisation of Spanish culture leads to widespread ignorance of any kind of tradition!

In keeping with Catholic tradition, there is a seasonal carnaval at this point in the calendar, to coincide with Shrove Tuesday.  In school it was announced that children and staff could wear their carnival costumes to school last Friday. Rummaging around for a costume, I spent some time sewing scallop shells on an Australian ranch coat and matching sou’wester, and converting a very long broomstick into a pilgrim staff, and I went to school dressed as Santiago de Compostela, Saint James the patron saint of Spain.

At school on Friday morning, I had no sooner parked my car in the street nearby and set off towards the school gate than a passing motorist called out “¡ Buen Camino !”  Clearly she had got the reference straight away.  It was not so easy in school.

“Great cloth, Mr Thomas!  Is you being a pirate?”

“No, don’t be stupid, Pablo: Mr Thomas is costumed a fishing man.”

To be fair, when I did registration for Year 12 at 9.25 they knew that I was meant to be Saint James but they had no idea he was the Patron Saint of Spain.  Nor did they have any idea why we have carnaval at this time in the calendar: it was just an opportunity to dress up.  Who cares what it means?

Carnaval is really about shopping.  We can all go to the Carrefour hypermarket, pick up a few banana costumes and have a good laugh.  That’s the be all and end all of it. 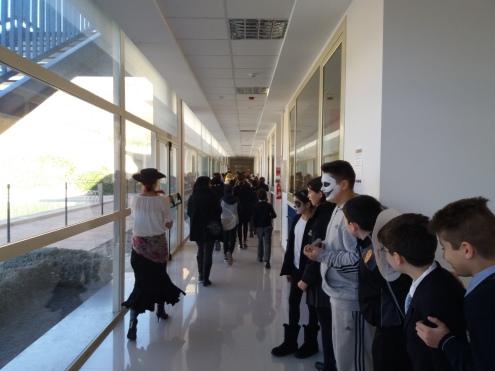 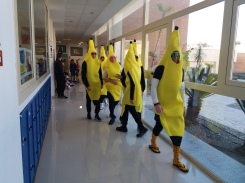 So the first hour of the school day was spent going around in procession to the sound of banging drums and then we were all expected to carry on delivering lessons as usual for the rest of the day.  No chance.  A class full of Year 8 in carnaval costumes and your Geography teacher Mr Thomas dressed as a “pirate” and you won’t get much done on the subject of coastal erosion.

So I spent the whole day telling each class to put their books away and launching into an hour long explanation of who is the Patron Saint of Spain, how the disciple of Jesus came to Spain on a mission, was martyred and by legend came to be buried in the province of Galicia.  Then we looked at carnaval  and why this happens before the Catholic season of Lent, leading up to Holy Week and Easter.

My classes were amazed.  It seemed they’d never heard any of this.  It was better than The Lord of the Rings.  Each lesson finished with applause.  These were some of the most successful lessons I have delivered in this school year, and I came away totally depressed at the end of the day.  We have totally lost it, haven’t we?

4 thoughts on “Goodbye to tradition”