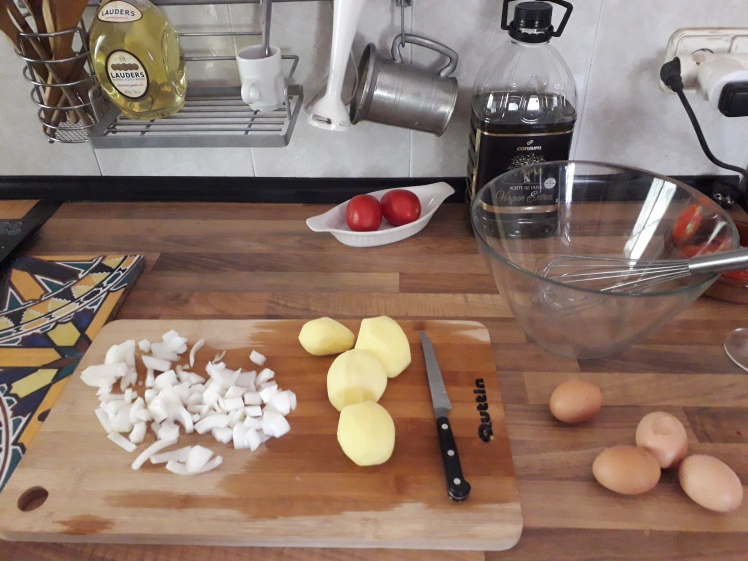 The Spanish national dish – if there is one based purely on popularity – is tortilla con patatas (Spanish omelette), and it is simply a matter of whisking a few eggs and frying with potato and onion, so what’s the big deal?  The fact is that you take pot luck in any Spanish bar or restaurant and it can range from good to appalling, but is mostly very poor.

On Monday, coming home during the heat of the day, I stopped in Orxeta and decided to have a light lunch of tortilla and a beer.  This was at the recently opened bar called “Plan B” on the main road, so it doesn’t require going into the village and finding a parking spot.  A functional quick lunch, in other words.

The segment of the round tortilla (or ración) from the glass tapas display at the counter was put into the microwave and serves with four slices of dry bread.  It was the classic rubber tortilla, completely dry inside, and virtually inedible, except I ate it because I was hungry.  On the terrace outside the bar “Plan B” a solitary retired Englishman annoyingly played Moroccan music on his mobile phone and blew coulds of cigarette smoke over me.  This is the hazard of eating outside these days, isn’t it?  It did not improve the tortilla experience.

I am sure the tortilla would have bounced off the floor back to table height, if thrown down vertically.  Or indeed it could have knocked an antisocial neighbour out of his plastic terrace seat if thrown horizontally.  The tortilla and two beers (a second was needed to wash the experience away!) cost me five Euros and fifty cents.

Bar “Plan B” instantly became “Plan Z”, as far as I was concerned, but the experience was very serendipitous.  When I arrived home I had a quick read of the Spanish newspaper El Pais which had an article on the food page about the Spanish tortilla, and the fact that it was quite often served in a very sorry state.  There followed a very good recipe for doing it properly.  Today I followed that recipe and here it is, with my photos.

(Sorry. 6 photos will not upload.  This has been a continuous problem with this WordPress blog for two months.  It makes writing a blog post a real pain.  Will need to speak to WordPress tech advisers again.)

The potatoes must be thinly sliced and fried first with olive oil (about a cup-full) with the onions if required.  There are purists who say no onions should be part of it!  Then the fried potatoes and onions should be strained and put in the mixing bowl with the whisked egg, and left for five minutes.  Then return the mix to the frying pan and cook on medium heat, turning with a saucepan lid.  And that’s it. 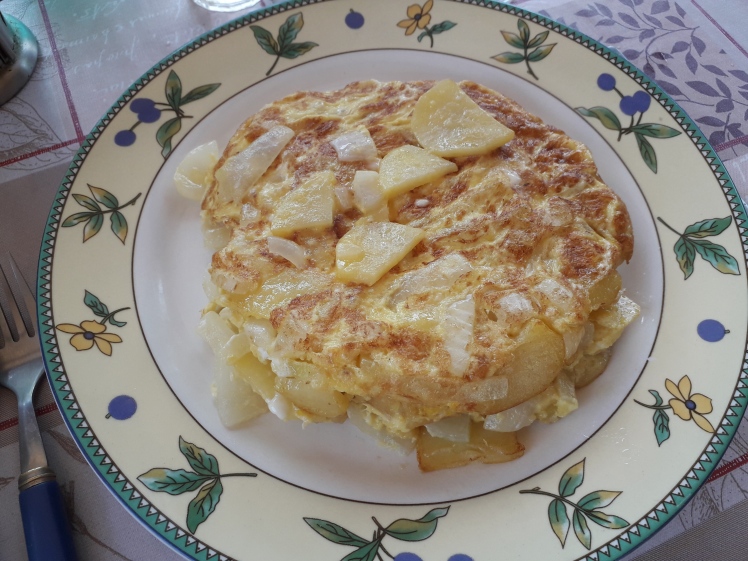