If you think British politics is now the laughing stock of the world, Spain is in its run-up to the general election on Sunday and the four main candidates were in a television debate last night where it was impossible to hear any of them because they couldn’t stop talking over each other. Then came the classic of the evening, which the Madrid newspaper El Pais this morning says was worthy of Groucho Marx:

I have been confined to the house for the past week due to continuous thunderstorms and fierce storm winds, so I spent a lot of that time indoors watching Netflix films (mostly the excellent Breaking Bad spin-off series, Better Call Saul).  I wanted to quickly use up the last of my 40 gigabytes of download from Eurona satellite internet having cancelled the contract.  More about that later. 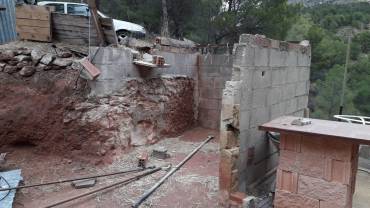 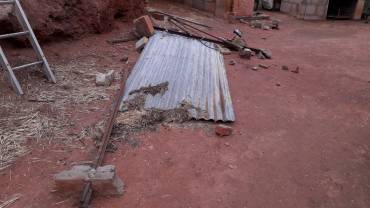 The storms caused some damage but luckily nothing serious. and it will take just a couple of days to tidy up; apart from the donkeys’ food store area which will need a few days work to repair the roof.  That was destroyed by 70 kilometre winds at four o’clock in the morning, while I was battling to get down the awning in front of the house and save it.  I succeeded in that and have learned a lesson from it: the awning needs a quick-release system on the tensioning wires so it can be taken down quickly in a weather emergency.

So now we are back to normal Costa Blanca sunny skies and the donkeys are picking their way around the edges of big rain puddles, after nearly a week confined to the stable. 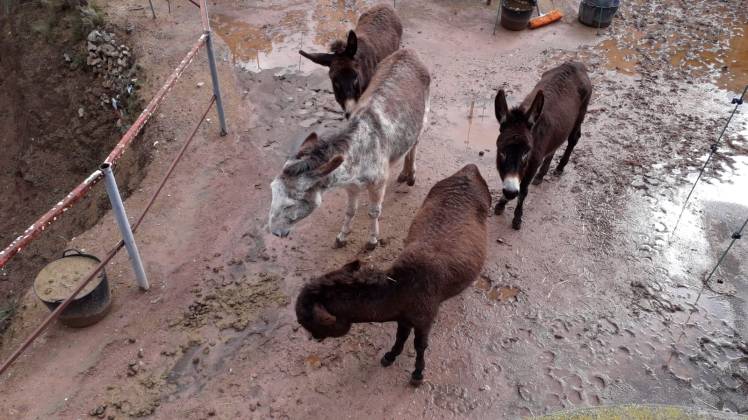 This place is usually an oasis of calm and quiet.  But for once, the situation here at home in El Parral is just like the wider world out there.  What a mad mess!

I shall not mention the dreaded B-word, except to say that I read a survey yesterday showing that over 60% of British people say the ongoing situation – after three years of turmoil – is a threat to their psychological health!  I honestly do not think there is much chance of it getting any better in the months to come.  I also feel that I’ve done all I could – at this distance from the action and twice flying to London to join protest rallies – and it is time to focus on the future here.  That future includes applying to become a Spanish citizen and I have enrolled in the CCSE citizenship exam in June.  I’ll be writing a blog about the citizenship application process later, as other British residents may find it useful.

Finally, a word of warning about EURONA QUANTIS S.A. which is the satellite internet provider I mentioned above.  If you’re reading this in Spain, please take special note and warn your friends and family about this company. Spread the word on social media.

Eurona offered a deal which seemed very reasonable: 40 gb satellite internet for €45/month.  Having explored many alternatives here, in a difficult location for normal phone networks, I decided in January to contract with Eurona.  Here is what the normal monthly billing looks like:

So, €44.90/month, as contracted.  Then – just two months after starting this contract – Eurona sent me this notice:

This kindly informs me that the cost of my internet service will go up to €103.42 / month from 1 May 2019.  I have telephoned Eurona and informed them that they will not hold me to this contract, and told them that I am informing the regulator immediately.  The details of the Spanish regulator for telecommunications are given here below, in case other consumers need them.  It is best to send a photocopy of your contract and any bills you have received, when making a formal complaint to the regulator.  I have previously won a case against Orange Espagne SA and have every confidence in the regulator to upold my right to cancel this contract with Eurona, as that price rise from €45 to €103 is neither justifiable nor anywhere near the average market price.

I have looked at the current Eurona adverts on the internet today and they are still advertising similar deals, as per the contract I entered into two months ago.  Oh dear, Eurona: that question from the politicos’ TV debate comes to mind: “Why don’t you stop lying?”  This is a scam and needs to be stopped.

When I have news from the regulator I will blog again on the subject.  Meanwhile, I am sadly resigned to doing without the satellite internet at home – which was a very good connection actually – and returning to a dodgy prepaid USB modem connection or using wi-fi in bars.

Yes, it’s a lovely blue sky above here today and as far as I am concerned, there may as well be no satellites up there.