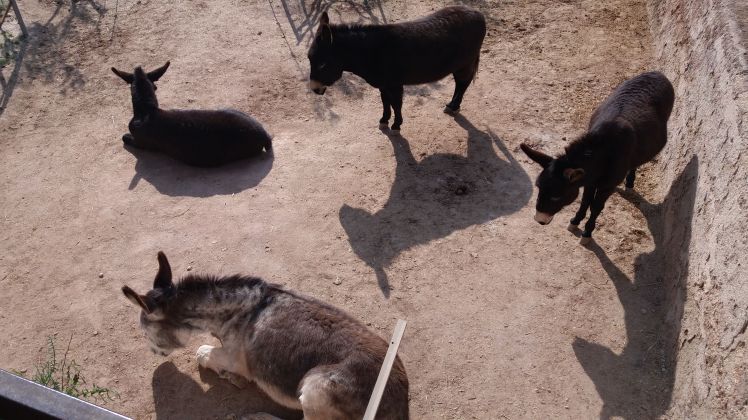 Since the foals were born in 2011, I have observed their behaviour with their two mothers.  If you followed this blog and the earlier one (Brother Lapin’s Pilgrimage) you’ll know I decided to keep the offspring as I could not find reliable and safe new homes for them.  So it was always interesting to see how the social behaviour of the four adults would develop.

Aitana is very closely bonded to her mother Matilde.  For example, yesterday Aitana was lying down dozing in the sun with Matilde standing still nearby, probably having a siesta standing up.  She yawned, looked over towards the pine trees where Rubí was standing in the shade, and she started to walk slowly towards the shade.  Aitana quickly snapped out of her slumber, looked up in an obvious panic, and quickly trotted over to rejoin Matilde.  That is her usual degree of attachment to Matilde, and it is worth noting that she was weaned from mother’s milk very late: after nearly two years.

The pairings alternate through the day: Aitana with mother Matilde, then Aitana with Morris; Rubí with Matilde.  Usually, the female donkeys spend most of the day in one pairing or the other.  All of them spend some time on their own: Aitana and Morris when they’ve got into some individual project, doing something naughty like destroying a piece of fence or reaching for a forbidden tree that has come into reach. Rubí stands in her favourite spot in her house: the same place in the stable that she adopted in the stable on the old field before we moved last July, and as soon as I reassembled  the stable here, she sniffed out the very same timbers erected in the identical structure here, and established her “house”.  Matilde is usually only alone when standing dozing, sitting dozing, or lying down dozing.  This is usually accompanied by loud snoring, and occasional grunting noises to express pleasure on enjoying a lazy time.

Describing environmental effects on donkey behaviour, Ben says, “if the donkeys’ environment has limited vegetation and reduced water availability then mares spend much time on their own or with a previous year’s offspring”.  He is describing conditions in the wild, of course, and making comparisons between horses’ herd behaviour and donkeys’ more individualistic character, but the close bond between Matilde and Aitana is clearly a typical one in donkey behaviour.

There is much more distance between Rubí and Morris, which is also a curiosity because, from the start, Rubí was much more demonstrative in her affection for her foal Morris. Here’s an excuse to link to a foal video from my previous blog. (Oh all right, since you insist, here’s another one!)

On the other hand, Matilde kept a certain aloofness from Aitana from the beginning.  Aitana had to keep pushing Matilde, jumping up at her constantly, before she got the attention she wanted.  Usually a bite!  The mother-daughter relationship is still very one-way: Aitana still does the following, but Matilde doesn’t go seeking out her offspring.  If I seem a little obsessive about this, it is because I have a fascination for John Bowlby’s attachment theory (a study he developed in the 1940s by observing ducks and then applied it to young offenders!)

Morris and Aitana enjoy a quite routine male female bond, and he only mates with her when the females are in season (although nothing will come of it, as he was gelded as a yearling).  He does play biting games with Matilde, but she is too big for him to mount and he is also afraid of her kicking him, which he remembers from past attempts and has given up on the idea.  He doesn’t bother Rubí either…  although she does tend to regularly mount him when she is in season!

The strongest mutual bond is between Rubí and Matilde.  When I first bought the two donkeys they were in a pen with about a dozen other donkeys and ponies.  While I waited for their passports to be completed and the transport paperwork to be completed, they stayed at the seller’s stables, but I asked for them to be put in a separate pen together, and I visited them every week while we waited for the move.  From that time, six years ago, Rubí and Matilde have been together.

When I bought them, Rubí and Matilde were both pregnant, and they synchronised to have their foals on consecutive days in October 2011.  Then came a time of some (competitive?) distance between them, as they were dealing with two lively and thoroughly demanding foals who seemed to require milk from them every fifteen minutes!  So the close bond was suspended for a while.  Then it gradually re-started again as the foals played together and did their own thing, later forming a strong peer bond, so the mothers re-discovered their old close friendship.

Rubí and Matilde are very rarely seen apart.  Their engagement sometimes goes too far, with Matilde recently cutting deep bites into Rubí’s neck while mounting her.  On one occasion last year I made the mistake of walking the two together, not noticing they had just come into season, and Matilde wearing the full saddlepack and heavy leather bags filled with water-bottles for ballast, jumped on top of Rubí and floored her.  It was a worrying moment because I thought Rubí might have broken a rib or worse, as she went down onto the rocky path.  Matilde doesn’t know how strong she is nor how dangerous her behaviour could be for Rubí.  So, even now, Matilde’s relationship with Rubí has to be carefully observed in case it gets out of hand.

I return to Ben Hart’s piece on donkey behaviour.  “Donkeys can become territorial over their pasture and will sometimes attack small livestock and pets.  This territorial aggressive behaviour, it is most likely to occur in young male donkeys especially in the springtime or when their environment provides little mental stimulation.  However, older donkeys both male and female could display this behaviour.”

In the previous field, there were occasional perceived threats, for example a passing fox or a wild boar, and Rubí made her aggressive snorting noise, standing in front of the other three to protect them and facing the percived outside threat.  Since we arrived here at El Parral, they have a whole wooded valley below their terraced field and there are many interesting sounds of birds and other wildlife including boar.  Gradually Matilde and Morris have also learned to do the snorting sound.  They stand in a line staring down into the valley and snorting in turn.  So far I have been unsuccessful in videoing this snorting behaviour: the problem is that it stops when I approach with the camera and I become the new focus.

Aitana usually remains behind them and does not join in these noises.  Her main job is to bray for food if it seems to be late arriving.  When food comes, it sometimes presents a new problem for Aitana.  Every morning: I arrive with a bowl of chopped carrots to greet the donkeys with a treat before their proper breakfast, a manger of straw mixed with a little alfalfa.  Aitana used to eat carrots along with everyone else, but then she developed non-carrot days when she would run away from the carrots and not return until the danger was over.  Then, there would be days when the carrots were not so dangerous and she would eventually pluck up courage to come and get one; just one, then run off again.  We have now got to a situation where Aitana hasn’t had a carrot since long before Christmas.

Ben Hart says, “Donkeys just like horses, need sufficient time to think through the problems that they face and they need their problem solving ability developed.” I’m not sure how to help Aitana work through the carrot problem, but it gets worse. She’s been talking to Morris.  He has refused carrots twice in the last week.  No problem: all the more for Rubí and Matilde, you might conclude.  But I am still curious to know what that’s all about.  It also applies to other treats…

*Ben Hart is an internationally known equine behaviour specialist and is a consultant to the Donkey Sanctuary at Sidmouth, who first recommended his writings to me.  By the way, the appeal continues for funds to help the donkeys in the severe conditions after the earthquakes and harsh snowfalls in central Italy.  Join me in supporting this help with a donation to the appeal.

Postscript:
As Alys points out in the reply below, there was indeed a recent occasion in which Rubí and Morris were grooming each other.  It was however precisely because it was such a rare event these days that it drew my comment.