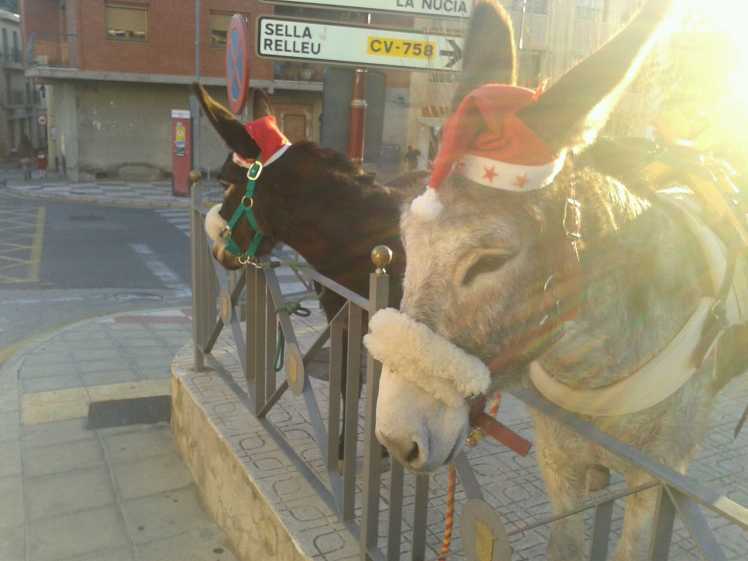 I first put Santa hats on the donkeys in 2011 when the foals were only three months old and skipping around like mad goats.  After that, it became an annual tradition for us.  It is nice to get a line-up of donks in Santa hats, looking spontaneous, but it is not that easy.  Just getting the hats onto them is a challenge: and Morris always likes to chew the other donkeys’ hats, so we have a battle to keep him off them!  Then we have the more complicated issue of getting them all looking in the same direction for the photo. 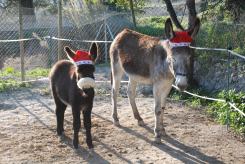 Here is the video of the team talk to the donks for Santa hats 2013.

My favourite donkey Santa hats photo is the 2015 one where they are framed against the magnificent backdrop of Puig Campana and Finestrat.  This was our last Christmas in El Caserio, before we moved to our new house last year.

And finally, our 2016 Santa hats collection from our photoshoot under the pine trees in our new home, El Parral.  The donkeys have now learned to run off as soon as I arrive bearing Santa hats.  “Oh no, not the pesky Santa hats again…  Run!”  So the whole thing takes a bit longer than it did the first time in 2011…

And this year?  You will have to wait for Christmas Day and see what variations we might bring to the Santa hats this year…

P.S.  One alert reader of this blog has pointed out that the Christmas hats 2014 collection is missing!  Correct.  Here they are:

Comments are welcome. Please note comment moderation is turned on. If you have commented previously your comment should appear automatically.

Donkey Whisperer Farm is all about donkeys! We celebrate, educate and promote these magnificent and intelligent beings. We are dedicated to building public awareness about equine personality, behavior and are deeply invested in educating and empowering you with safe, holistic, resistance-free training methods that foster a strong bond between you and your equine.