Rubí Donkey writes her Rubí Tuesday blog. It is New Year’s Eve and the end of the second decade of the 21st century.  Rubí reflects on the past ten years from a donkey’s point of view.

A long time is often referred to as “donkeys years” as donkeys have remarkable longevity in the animal world, living on average forty years when well-nourished. Rubí was ten years old in June so this is her first decade.

“Are you going to write a review of the decade?” asked Morris, chewing a piece of black plastic tube he had torn off the Peasant’s carefully constructed irrigation system for the olive trees.  “Everyone’s doing them, reviews of the decade: it’s the thing.”

“Why are you eating plastic, Morris?” I asked.  “It’s neither nourishing nor helpful and the Peasant will get cross with you.”

“Well, start with that topic in your review of the decade,” said Morris, staring at me with his parroty eyes screwed up tight as he chewed on the mangled tubing.  “We’re all eating more plastic now.  Either accidentally or deliberately.”

1. A long way from Parcent

A decade ago – and it is my first ever decade – Matilde and I were born and we lived in Parcent on the other side of the great Sierra Bernia in a stables next to La Piscina restaurant, where the speciality is jabali – wild boar – and the owner Francisco Campo Gandara stages Flamenco entertainment for his lunchtime customers from the Costa del Sol resorts.

One day, a Peasant arrived with his daughter, wanting to buy two donkeys.  He saw me and he liked me very much, so he bought me.  Then he returned soon afterwards with his experienced donkey-walking friend Barbara from France. She recommended Matilde, so the Peasant bought Matilde too.

That is how we began the decade: Matilde and I were separated from the other donkeys and ponies and we were put into a nice spacious pen where we were fed separately.  The Peasant arrived every weekend, bringing us carrots and a basket with a brand new set of grooming brushes.  He said he was waiting for the papers to take us to a new home, a long way from Parcent, on the other side of the Sierra Bernia in a place called Finestrat.

“Do you know anything about Finestrat?” asked Matilde.

It would be a while before I would learn that these things could be discovered using Google maps.  It has been a long decade and I knew nothing about computers, blogs or social media in those days.

The day we were transported in a horse box from Parcent to our new home, we were very stressed because we had never been out of our stables before.  We arrived soaked in perspiration, and even though it was a dry day we looked as if we had been drenched in a shower as we stood on the doorstep of the Peasant’s house, Elca Seriu.

It should have been called El Caseriu which is “The Farmhouse” in Valenciano, but the man who stuck the tiles on the wall of the house was illiterate and put the space between the letters in the wrong place.  Elca Seriu seemed named after a serious elk, but Miguel the landlord who rented the place to our Peasant was too mean to bother paying to have the tiles rearranged.

Francisco Campo took one look at our new owner’s arrangements for enclosing his new donkey field and said, “They’ll be up over that wall and away before you can say ¡Hola, burros!  You’ll have to tie them up or find an alternative pen!”

So the Peasant took us into his house for the next few days while he put up new electric fences.  We started off our new life thinking we had four-star accommodation in a spacious house!  Soon we were having outings to the beach as well!  It was very slow going because one thing we had failed to explain to the Peasant was that we were both pregnant. At the time – knowing nothing about donkeys – he did not notice.

Rubí and Matilde at the beach, Vilajoiosa 2011.  A very obviously pregnant Rubí.

The decade developed fast.  Very soon we were four donkeys.  My foal Morris was born on a Saturday and Matilde’s foal Aitana was born on Sunday, less than twenty-four hours later.  So, most of the first half of this decade just became a donkey foal circus.  It was a fun time for all concerned. The Peasant captured the magic of those days very well in this video.

In 2015 our Peasant celebrated five years of his original “Brother Lapin” blog, in which we donkeys had been made the centrepiece of a long-running story which – in those days – had developed a regular following.  Our Peasant had started his new life here as an English teacher in a local secondary school, then seized the new opportunity offered by faking his CV to become a Geography teacher in a bigger local secondary school with a more permanent contract.  He brought the children from the school to see his donkeys as part of the summer school outings.

Then, in summer 2016, two things of great significance happened.  Our Peasant bought a new house for us in the mountains and everything was suddenly looking very good for us, with a whole new landscape and much more space for us.  At the same time there was a rude Brexit referendum in the country formerly known as the United Kingdom.

The Peasant began a long gloomy time and became a bit of an Eeyore.  He would spend the next three and a half years fighting to remain in Europe and muttering Bollocks to Brexit! at every suitable opportunity.  He could be seen standing in a corner of the field swearing at Ryanair planes flying overhead.

There is little point in going into any of the arguments involved now.  As our Peasant says, “It was all a fucking waste of time and the bloody bastards screwed us from the very start, so what was the fucking point of any of it?  Eh!”

With these words, the Peasant showed how he is magnanimous in defeat and he accepted the final outcome in December 2019 as the fair democratic decision of the Russian people.   It is convenient for the strategic interests of an enemy power to have a scheming scoundrel, a clown, a blackguard and serial liar as Prime Minister running the UK.  The Peasant accepts this outcome and the end of the decade finds him moving on and at peace with the decision of the racist pig-ignorant fascist bastards.

In summer 2020 the Peasant will have been here in Spain for ten continuous years and so he can apply for Spanish citizenship.  He passed the first citizenship exam and he takes his second exam in February.  We donkeys did not need to take any exams: we have always been Spanish.

And so what?  Our Peasant is now retired from teaching and has applied for his Spanish pension which gets added to his UK pension and this princely sum of money all gets paid to the bank to continue the loan repayments on El Parral our lovely quiet home in the mountains, while the Peasant scrapes his pennies together to pay for our needs.  He has just enough left over to pay for his meagre gruel and cheap supermarket beer at 65 cents a litre.

So that is the end of my review of the decade. Matilde and I have come a long way from La Piscina in Parcent on the other side of the Sierra Bernia.   And the Peasant has come a long way from the gloomy mad island off the western coast of Europe which becomes a banana republic in exactly one month, on 31st January.

“Well, Morris, is that what a review of the decade should look like?”

“It’s all right, I suppose.”  Morris always looks unimpressed with my blog contributions.  But he only reads: he doesn’t know how to write.   “You could finish with a silly photo of the Peasant dressed as Santiago de Compostela and the sixth form boys dressed as bananas.  It was the very last school photo of his career.  To my mind, it defines the decade.” 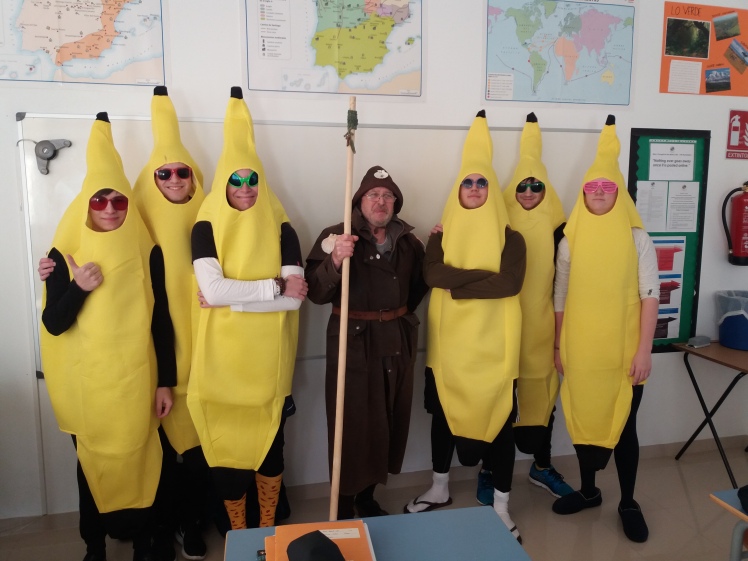